Nyanga High School also known as Nyanga Marist or Marist Brothers is a boys-only school that was established in 1962.

Nyanga high school is located located in Manicaland province in Nyanga district about 32 kilometres from Nyanga CBD. It is run by the Roman Catholic church. The school offers ordinary and advanced level and has a boarding facility.

The school is located in the bush far away from the madding crowd which provides a conducive environment for effective learning as pupils can only listen to the melodious voices of birds.

Other Marist schools in Zimbabwe include Kutama College and Marist Dete. Nyanga has grown from strength to strength both academically and sportingly and over the years has overtaken the likes of Kutama College to become the biggest and most consistent academic powerhouse in Zimbabwe.

Marist Nyanga Boys High School is well known for housing some of the top students in the country. The school has posted some outstanding results in the public school exams. In 2017 the school's A-Level pass rate was so high that the school came second nationally.

A 100% pass rate in the November 2013 A-Level exams saw the school claiming the top spot in the competition for best 100 schools in Zimbabwe.

Over 20 students at the school scored 15 points and above that year, with the highest Terrence Muradzikwa attaining 25 points or straight As in Mathematics, Physics, Chemistry, Economics and Business Studies. Muradzikwa was later awarded a scholarship to study at Harvard University in the United States of America.

In the November 2019  Zimsec O’Level examinations the school attained a 96% pass rate with the best student getting 19A's! See the image below of a list of 31 students from the school who had 10 A's and above in those exams. 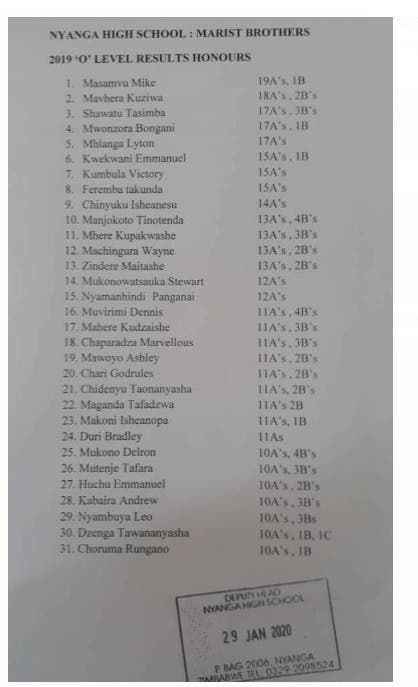 The incredible academic performance by the school also extends to extra-curricular activities.

In 2016, the school’s quiz team won first place in National School Quiz Championship contest which was held in Johannesburg, with 23 schools participating from other African countries like South Africa, Botswana, Zambia and Zimbabwe participating.

They repeated the feat again in 2018.

Marist Nyanga has a student population of about 550 pupils from all over Zimbabwe. Due to demand and the need to maintain the highest standards at the school, strict screening of prospective students is undertaken.

Application for form one place at Marist Brothers Nyanga high school is not done using any downloadable application forms.

Rather, you apply online using the government's eMap system. The school then vets the applications and allocates places to deserving students.

We are not sure of the application process for this level at the school. You can make use of the contact details below to hear from the school.

See the school on Google Maps

Do you have a comment or anything to add about Marist Brothers Nyanga Boys High School? Please make use of the comment box below or email us learn@openclass.co.zw