Zrp High School is a private boarding school owned & run by the Zimbabwe Republic Police. The school was established in 2001 in  Hatcliffe Harare but officially opened its doors to the first batch of students on February 3, 2003.

The school was set up by the then Commissioner of Police, Augustine Chihuri as a means to curb the inconveniences to children of Police force members when their parents are transferred to a different province. Despite it being built to mainly cater for police force children, it is also open to non-police force members' children.

However, school fees are pegged differently for both groups with the latter paying close to double of the former considering their parents contributed towards the construction of the school through deductions from salaries.

The school has posted some impressive results in the Zimsec public exams in the past. A 98% pass rate was registered in the very first O-level exams taken at the school in 2006.

A trend had been set and it has been maintained since then. Resultantly, the school has perennially featured as one of the top ten academic schools in Zimbabwe.

For example, the school had a 95,76 per cent pass rate in the 2015 O-Level exams. That year it was the best performing school in Harare and was also the third overall national high school in Zimbabwe for the third year running.

Around 700 students are enrolled at Zrp High School.

The school offers 10 subjects at O’ Level and arts, commercials and sciences at A’ Level.  In line with its founding vision to produce globally competitive products, French classes are offered with plans to introduce Chinese lessons well underway.

The school has also proven its mettle in extra-curricular activities as the institution has also scooped national and provincial honours in debate, public speaking, drama, chess and athletics over the years.

One top accolade that the school got was being crowned the 2013 National Debate on Climate Change winners, sponsored by the United Nations Development Programme (UNDP).

Gold & blue are the school's colours and they are used in the Zrp high uniform as shown below. 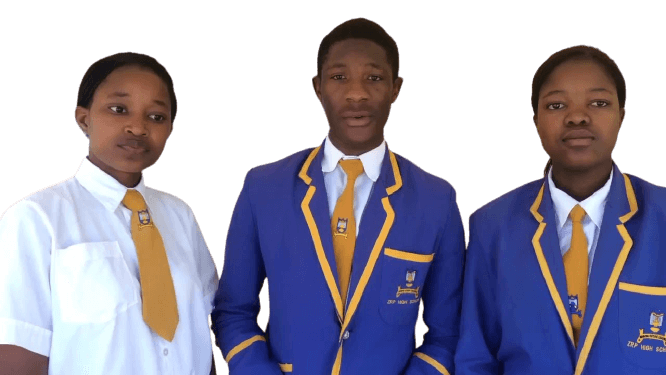 How to Apply to Zrp High School

Form 1 enrolment for the ZRP High School 2021 intake is done through the Ministry of Education’s EMAP platform: this is usually available after publication of the Grade 7 results. No applications are accepted directly at the school.

The competition for A-Level places is very stiff at the school. As such, only students with 5A's at O-Level are accepted.

Current fees figures for the school are not available. However, historically the school seemed to be more expensive than other boarding schools. For example, in 2018, the school was charging $1200 whilst other schools were charging around $500.

ZRP High School website is unknown or unavailable. If you know it please tell us in the comments below or email us at learn@openclass.co.zw and we will update.