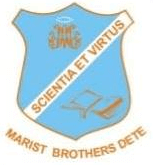 The school was established in 1972 and is part of the international family of the Marist Schools run by the Marist Brothers of the Roman Catholic Church. It offers classes from form 1 – 6. It also offers Advanced Level Sciences, Commercials and Arts.

Due to its high profile and excellent reputation, Marist Dete attracts students from all over Zimbabwe. The school won the National School Quiz Championship in South Africa in 2016.

The school is a top performer in the pubic exams. It features regularly in the top 100 best schools in Zimbabwe. In 2019 the school attained an 87.3% pass rate at O-Level and it was placed 19 out of 100 best schools.

There are no Marist Brothers Dete Secondary School application forms to download for form one places 2021. The enrolment is done online through the Ministry of Education’s EMAP platform.

This is usually available after publication of the Grade 7 results. You are encouraged to apply as quickly as possible because the competition for places is stiff and there are fewer places available.

The school was charging ZWL $918 which was equivalent to about US$300.