5. Fees At The School 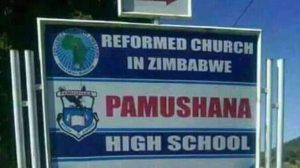 Pamushana High School is a mission boarding school run by the Dutch Reformed Church. The mixed school is located 80 kilometres from Masvingo along the Masvingo-Mutare highway just before Nyika growth point.

The school aims to educate the whole person – a complete person with academic, arts, sports and culture (ubuntu), discipline as well as upholding Christian values. The school does not believe in doing anything sub-standard and bought a luxury Scania bus in 2016 for students to travel in.

The school is truly a beacon in education and its name is synonymous with high pass rates year in, year out. The school is one of the top 10 high schools in Zimbabwe

Below are some of the outstanding pass rates attained at Pamushana high in recent years.

The school creates a conducive environment to help pupils thrive.

The schools' enrolment is around 1 200 with a staff complement of 38 qualified teachers and 6 student-teachers. To enrol for form one at the school you need to use the Government's eMap system.

“Pamushana has a culture that strives to create a balance between academics, discipline and sport.

The school has a legacy not only in academics but in sport as well. Pamushana high has been dominating schools sports in the country, particularly in netball where they won the Tanganda Tea trophy for four consecutive years.

They were also the 2018 Copa Cola boys champions.

The Pamushana quiz team also came out second in Sadc in a competition held in Tanzania in 2018.

Outside of sport, the school drama club scooped the Best Newcomer award in 2015 at the National One Act Festival in Harare after staging an enthralling drama. The school also made history as being the first school to be nominated for the National Arts Merit Awards (NAMA).

Unknown. If you know it please share it using the comment box below and we will update it here.

Current school fees for the school are not available. However, Pamushana is generally not a very expensive boarding school.

Pamushana high school rebranded in 2017 and moved away from the traditional blue uniform to a new one, one of a kind – scorched purple and charcoal grey skirts, charcoal grey trousers, white shirts, red blazers, red jerseys and ties.

The new uniform was adopted to give Pamushana high school a world-class image befitting a school of its calibre. The uniform samples were brought in by Mr Johnson Madhuku who was the head of the school for 23 years before leaving the school last September after he was voted Bikita East MP.

Mr Madhuku brought the samples of the new uniform from Australia last year and they were then modified a bit.

Pamushana High School Ecocash biller code 13177.
See Pamushana High On Google Maps here.
Pamushana High Postal Address
P. Bag 514
Nyika
Masvingo
Email address: none known at the moment (if you know if please put it in the comments below)
Website: unknown or none

Have any more info to add about Pamushana high? Please use the comment box below or email learn@openclass.co.zw and we will update the page.

27 thoughts on “Pamushana High School, A Perfect Place For Your Child To Thrive”